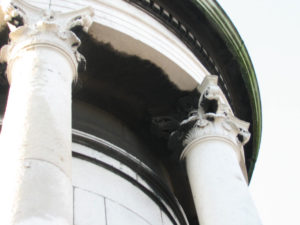 In 2007 the Select Vestry committed itself to a comprehensive restoration of the church and, under the direction of Dr. John McCrodden, the Treasurer, set about the necessary fundraising and organisation.

Dermot Nolan, chartered engineer and highly experienced conservation consultant was engaged to examine the building, prepare the specifications and supervise the work.

Specialised building contractors Conservation and Restoration were appointed to carry out the works.

Phase One was carried out in 2007. It involved full conservation of the exterior on the east side of the nave including cleaning and re-pointing the masonry, repair of the parapets and rainwater disposal system and refurbishment of the windows.

In 2008 the same work (Phase Two) was carried out on the west side of the nave and the south (chancel) side.

Phase Three was completed in April 2010 and included the complete restoration of the Portland stone facade and the renovation of the distinctive copper dome cupola and the clock.

The works have involved a total expenditure of about 750,000 Euro and they have been generously grant aided by The Dublin City Council, The Heritage Council, The Department of Environment, Heritage and Local Government and The Representative Church Body of the Church of Ireland. The works have also been supported by private donations and fundraising by the congregation.

At the completion of the work, approximately 100,000 Euro remains outstanding and donations would be most welcome. Please speak to the Rector, The Reverend David Gillespie, The Vicarage, 88 Mount Anville Wood, Lower Kilmacud Road, Dublin 14 (01 2880663) or The Treasurer Dr. John McCrodden (0868433292).

About the Author: david gillespie